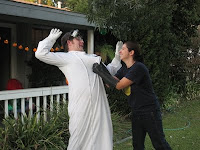 I am keeping this blog to chronicle a 100-day commitment I made to my husband.  Dieting together or daily sex can increase intimacy but my blog is not about either of those things.  For the next 100 days we are going to play video games.

John and I have been together almost a decade and married 7 years.  Our relationship did not begin as a star-crossed romance but a geeky friendship.  Before dating we watched professional wrestling and played video games while dinning on chex mix and string cheese cuisine.  I was a social creature that demanded John accompany me to our prom but even then we never had any illusion Bella and Edward status.  Here we are a decade later some how grown-ups with two kids & a mortgage.

On our anniversary or at occasional parties we will pick up a controller together but this is a rare event.

We both give our all to our kids, family and jobs but have let our relationship fall low on our priority list.  To invigorate our marriage we have made a vow to one another:  for 100 consecutive days we will play video games together for at least one hour each day.

I hope here to find suggestions, comments or encouragement because I know it is going to be a hectic few months.

John and Chris must play video games together at least one hour each day.  The time can be broken up but not banked for future dates.

Co-op, party and online play all count as “together.”

Single player games can be used if controller is shared evenly or one player helps guide another through a previously played level.

Games must be considered video games.  Arcade, console, handheld and PC games qualify as play.  Facebook and cellular phone games do NOT count.

Posted by Professor CCB at 9:46 AM