Why we need to retire the Old Adjunct: What I Learned at an International Conference about Organizing Contingent Labor

The simple classroom could have been located in any of the four countries represented in the room, if not for the New York skyline in the backdrop.  The dry erase board in the front of the room was cluttered with social justice terminology.  Half of the 25 people in the room had their arm extended indicating their desire to speak.  This was not a room of eager students but contingent educators brainstorming about the media.

The conversation started with input from an editor of an education news agency.  The presenter proclaimed that daily newspapers do not care about social justice and doing education right.  Instead, the media wants to discuss higher education as a “consumer issue.”  Simply stated, the guest journalist communicated that most media is not interested in the plight of college teachers.

It is difficult to explain labor issues to a public that largely is unaware of the existence of part-time professors.  The claim from our expert was clear: when talking to the media teacher victimization is not a popular pitch.  After decades of fighting for job security it is time to retire the adage of the “poor adjunct.”

As the conversation shifted the audience came alive.  The room was a flutter with ideas of how to illuminate the research, artwork, and teaching accolades of adjuncts.

Then, a millennial peered her head from behind her MacBook and asked the audience to consider her generation.  She shared that she was “not interested in her teachers’ scholarly research” but instead just wanted a “good teacher.”  A room filled with brilliant educators now had to shift gears to not only change the way they tell their stories to media and also, consider a younger audience.

In a few days I will turn 33 and I have spent the last nine years as an adjunct lecturer.  One of the best parts of being at an international labor conference was gaining insight and context from other adjuncts, some which have been teaching longer than I have been alive.  The title of this blog post was not intended to be ageist towards these trailblazing leaders but hopefully get you to read its content on this important issue.  We need to keep our history alive and retire the old messages that work against us.

The Survival Mentality of an Adjunct Professor:
The Dream of a House with 2 Bathrooms

The daughter of a single teenage mother my early years were transient.  There were always at least three people in our apartment and only one bathroom.  One thing I have known since I was small child is that when I grew up I would live somewhere with more than one bathroom.  Another passion that emerged early was my desire to be an educator.

In 2006 I was hired as a full-time adjunct professor at a state college in central California.  As the sole breadwinner for my family I was lucky to be teaching in my hometown that has one of the lowest costs of living in the state.  After two years of teaching I was able to buy my first home and was living my two lifelong dreams—a house with 2 full baths and a teaching job in higher education.

Everyone knows what happens next in this story: the market crashed in 2008.

The moving vans descended and within months our street filled with loud children and barking dogs went quiet.  When the smoke cleared there were only two of the original families left on a street once filled with young working families.

At the University where I work the faculty offices emptied as quickly as the houses on my street.  I remember my University President boasted to local media that our campus had not had any lay-offs.  This is technically true because adjunct faculty are not considered permanent employees. This means, if we never get asked to teach again they do not have to call it “firing.”  Like the empty yards, empty offices created a sense of loss and fear especially for the junior or temporary faculty like myself: to keep my dream career and home I worked harder than ever.

I did not get to keep my job just because I worked hard.  There are plenty of hard working educators in higher education that were not so lucky.  I was able to keep my job because to protect junior faculty other professors: retired early, increased class sizes, agreed to voluntary furloughs, increased service work, and fought harder as faculty activists. 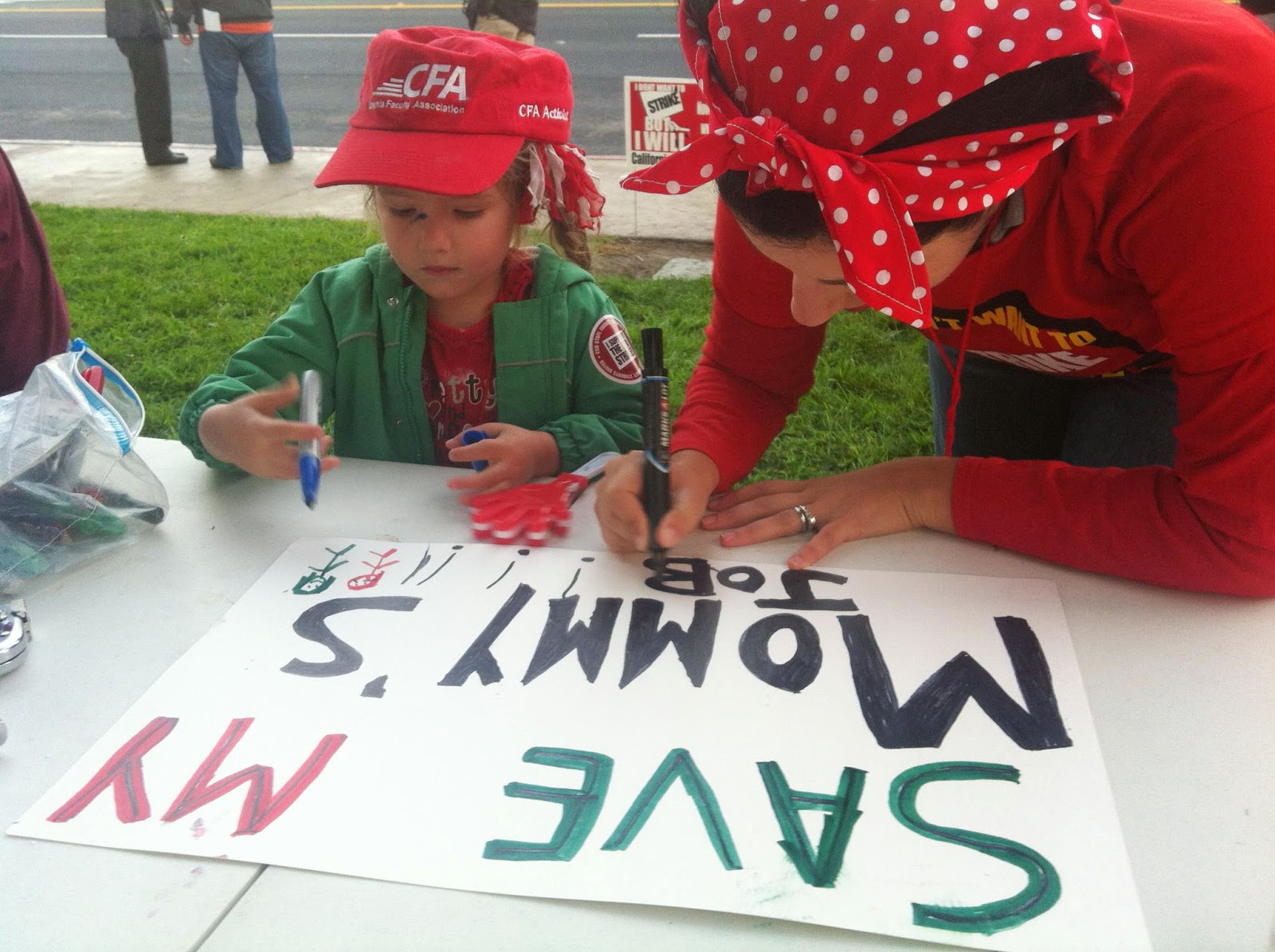 *Photo of from 2011 of myself and daughter creating poster at a protest to protect CSU faculty.

As an adjunct faculty member the majority of my academic career has been spent fighting to remain in my classroom.  This week I am attending the Coalition of Contingent Academic Labor (COCAL XI) in New York to regroup with international contingent faculty to discuss now that I am still where I belong, what comes next.

My mental model has been about quality education and survival.  This week I hope the conversation with fellow activists will be about both overcoming my fears and developing a plan for a future.  A plan where my expertise are valued and I am no longer treated as though I am expendable.
Posted by Professor CCB at 8:02 PM No comments: