What is a Snooki?

Watching Wrestlemania live was wonderful, but I did miss the nuances of commentators and dialogue to help the flow of the stories. For me the litmus test of a great wrestling match is not just impressive bravado and physical skill, but also the ability to surprise me with interesting reversals and maneuvers; Wrestlemania XXVII did not disappoint in that respect with the Del Rio vs. Christian match and Undertaker vs. HHH. The show was filled with surprises, but I will list the best and worst.

I titled this entry “What is a Snooki?” because last year in my public speaking student class a student asked to do a speech on the topic “Snooki”. I said, "What is a Snooki?" This is important because she made it as number one on my list.

1. Snooki/Trish Stratus fight- I have never seen an episode of the show Jersey Shore, but I think Snooki is awesome. Trish Stratus flipping backward off the top ropes to the outside of the ring and in every other way showed amazing technical skill. Snooki ended the fight with surprising energy and a great move. Overall I expected this match to be long, boring and uneventful. It blew me away.

2. HHH intro- The Game totally brought it with his entrance. He played Metallica’s “For Whom the Bell Tolls” and he was flanked by marching Vikings as he entered the arena. It was spectacular to watch, hear and remember.

3. Pee-Wee Herman- Pee Wee Herman and The Rock made fun of Cena…nuff said.

4. John Cena Intro- Cena had a full church choir. The lead singer had amazing pipes, and almost brought the audience to tears. Enter the prayer from DMX's second album. I was almost ready to join Cenation.

5. Glass Booth - When The Undertaker and HHH took the fight out of the ring I knew they would go for the Spanish commentators' booth first thing. I did not expect them to completely tear down a Plexiglas booth as they wrestled. That booth looked pretty steady while The King scaled it about an hour earlier.

6. Captain America- I loved Rey Mysterio dressed as Captain America. Wrestlemania should have fun costumes that the audience reacts to - for better or worse - and Mysterio is keeping up the HBK tradition of bringing the flare.

7. Stone Cold- No matter what he did - and much to the dismay of the mother seated in front of me 0 I was going to scream and flip the bird when Steve Austin came out at Wrestlemania. I did not expect "Stone Cold" to enter on a quad and send Michael Cole running like a little girl to hide in the Plexiglas booth. This moment had me cackling with laughter and it was a great surprise.

1. HBK- The number one worst surprise for me was how small of a role Shawn Michaels had in the show. A lot of reviewers are complaining about the direction for the show, the ends of matches and the role of The Rock and Stone Cold. My biggest disappointment was that The Heartbreak Kid never intervened in the HHH and Undertaker match, even to help The Undertaker from the ring, rather than allowing him to be carted off.

2. Crying Kids- Leaving the arena I saw hundreds of adorable children in their parents' arms crying after Cena’s loss. I have been at funerals with less tears. I am not a huge Cena fan but it was surprising to me how devastating the loss was and that the WWE would allow so many kids to walk out early and leave Wrestlemania depressed.

3. HHH- HHH tapping out in his match was devastating to me. I was not surprised that he lost. For me, it was the fact that he would actually give up.

4. Sheamus Shafted- The US Title lumberjack match was horrible. Sheamus was misrepresented in the show program as a Wrestlemania performer, but his match actually became a pre-show debacle that turned a cluster$*k of a battle royal, and ended without either of the scheduled wrestlers standing victorious. It was horrible to watch in a stadium, and television viewers did not even get a chance to watch it.

5. DMX- Cena used a new intro with a gospel choir and a prayer by DMX. Since it is Wrestlemania and Cena’s hip hop/rap music have been a topic recently hyped by The Rock, I thought DMX or even Snoop Dogg might emerge and perform as a surprise… Nope. It was just a clip from DMX's second CD, and wasted what could have been an amazing television moment.

6. The King Match- I love The King but his match was way too long. While other matches were filled with technical skill and surprises, this match was long, boring and unskilled. There were funny moments but by the end I was completely bored, which is shocking because Stone Cold was there.

7. Undertaker Angle- I don’t hate The Undertaker angle but I was surprised how helpless and old they made The Undertaker seem. Being evacuated from the stage by paramedics made him seem like a broken old man, even after he had just performed such an awesome match.
Posted by Professor CCB at 2:20 PM 2 comments:

What Not to Wear: Wrestlemania XXVII

I received an email two days ago reminding me to wear business casual attire to the WWE Hall of Fame Awards. I had already packed basing my wardrobe choice on photos from last year's event. Panicked, I called the venue and asked if I should wear “cocktail casual” or “business casual?” Without hesitation the woman politely informed me that she received dozen of calls from fans and the general consensus was jeans. I could never wear the top I had brought to work and was relieved that my choice was appropriate.

The efforts by WWE to make this event more classy are admirable, but cheering in athletics bleachers seems at odds with an upscale aesthetic. The email had varying effect and made people-watching a joy. "Stone Cold" Steve Austin embodied this paradox in a tailored three piece suit accessorized with a few beer cans. Other than the VIP on camera I only counted about two dozen women in heels. I expected the outrageous, but what surprised me was that female WWE fans really took the email to heart and honored the occasion with beautiful party dresses.

Like women’s attire at the event, the occasion itself was a mixed bag. Here are my highlights of the night's awards.

Hacksaw Jim Duggan -The crowd chanted constantly “U.S.A.” and “Hoooooooo” as Hacksaw shared the story of how he got his trademark persona and 2x4.

Bullet Bob Armstrong-"Road Dog" and Armstrong's two other sons introduced him and he entered with his trademark dance, keeping the fans on their feet.

Sunny- A farce that cheapened women’s role in the WWE as Diva’s made annoying faces and didn’t break character to present. They introduce legendary personality Sunny.

Abdullah the Butcher-“I have been forked by Abdullah in every state in the union.” -- Terry Funk

Shawn Michaels- I cried during the promo video, laughed during HHH’s roast and was on my feet instantly during the surprise reunion of The Klique.

Getting to see and hear the honorees recognize God, wives and children was really special. Watching HBK jump off the stage to embrace his adorable red-haired daughter made my night. Just like the outfits there were some duds, but the great ones made up for the rest.
Posted by Professor CCB at 12:38 PM No comments:

From Bakersfield to Wrestlemania XXVII

Making final preparations for our big trip to Wrestlemania I have received many quizzical looks and cynical comments. The effect reminds me of a saying born in one of my most memorable classes that has become a popular phrase for my family. 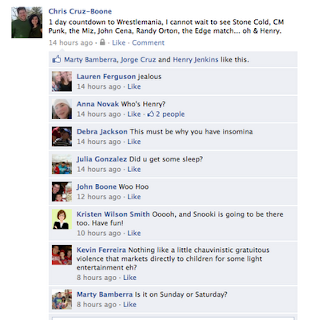 My students were not sure how to react to an online interview where I proclaimed myself a proud feminist. Without reading anything but the title of the article, one student inquired "how I fit flannel boxers under my lovely dress?" As the class held their breathe, I retorted that the student should "be careful, your Bakersfield is showing." Such was born a phrase that encompasses the inevitable awkward moments of our central valley culture. After yesterdays mixed and uncomfortable replies to my vacation destination I cannot help but feel like my Bakersfield is showing.


Wrestlemania is without argument an unrivaled entertainment spectacle but this is not at the root why I, like millions of others, am a dedicated fan. The WWE artfully performs a bi-weekly parody of American culture. It borrow characters like Snooki and Pee-Wee Herman from "real life" as it spins a web of villains/heroes and stereotypes and realities. Some dismiss wrestling as muscled men in underwear and surgically enhanced women promoting violence. Anyone who has attended a live event would never make this claim, they would attest to the artistry of six and seven feet tall men orchestrating aerial feats that rival circ de soleil . All without injury, only to get up and do it all again the next day in another city. I have only been to three previous live shows, but each I held my breathe, screamed in excitement and was swept away with the fervor of the crowd. Even though I have been an estranged fan, the transition back to high school television habits has been a delight. 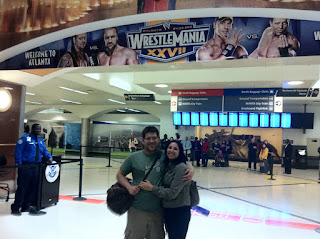 Those of us born and raised in Kern county acquire our own unique ways, tastes and beliefs. Arriving safe in Atlanta we emerged up the escalator to be greeted by a banner welcoming us to Wrestlemania at that moment I realized the WWE will always have a place in my heart and you cannot beat the Bakersfield out of me with a stick.

The Romance of Wrestlemania XXVII

The movie When Harry Met Sally posits that men and women can never just be friends. My husband was seated next to me through junior high school and became my close friend while dissecting a frog together at East Bakersfield high school. Worried about how I would react to pulling out organs, this introverted guy chatted endlessly about professional wrestling and Metal Gear Solid and we became instant lifelong friends.


We ate lunch together, played video games, I complained about my dating troubles and we watched wrestling. Three years post frog incident we remained close and completely plutonic. Watching Monday night Raw on February 8th 1999 our relationship changed forever, when John reached across the sofa and held my hand.


Married over eight years with two children my husband is still my best friend. A few months ago my friend Henry who lives in Atlanta called and pitched the idea of attending Wrestlemania at the Georgia Dome. We resumed our high school television habits, scrimped and saved, begged our cynical loved ones to watch our little ones and are all set to attend Wrestlemania XXVII.


My excitement has escalated because my favorite wrestling personalities from a decade ago, Stone Cold Steve Austin and the Rock, have reemerged in show storylines. To you as a reader, professional wrestling may be fake and corny but to me it is a time machine transporting me back to my teens to remember the first touch of his fingertips that changed everything I had known. To my husband, if you are reading this I plan to hold your hand through entire the main even. As time passes we forget how small moments shaped the course of our lives, we must cease every opportunity to rekindle the feelings that brought us to where we are today.